You are here: Home / Archives for All Posts / Traditional Media

CelebBoutique, the British clothing website, may have committed the foul-up of all foul-ups: 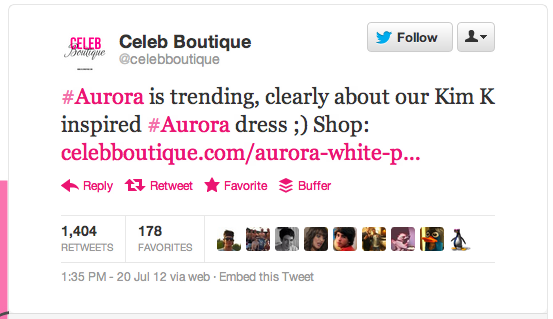 After being hammered for just a few minutes on social media, their social media people turned on the TV, and saw the terrible news from Aurora, Colorado. Then they sent this:

We apologise for our misunderstanding about Aurora. – CB

We didn’t check what the trend was about hence the confusion, again we do apologise.

We are incredibly sorry for our tweet about Aurora – Our PR is NOT US based and had not checked the reason for the trend, at that time our
—
social media was totally UNAWARE of the situation and simply thought it was another trending topic – we have removed the very insensitive
—
tweet and will of course take more care in future to look into what we say in our tweets. Again we do apologise for any offense caused
—
this was not intentional & will not occur again. Our most sincere apologies for both the tweet and situation. – CB

Meanwhile, most Americans are livid at the insensitivity of what is now being perceived as a vacuous and clueless fashion brand spouting off about clothes, shoes, and celebrities. As a result, CelebBoutique has just taken a major hit to its brand, with several thousand people pounding them like the fist of an angry god.

And it’s not going to go away anytime soon.

I’ll cut them a little slack. Yes, I’m angry, but I also recognize that mistakes do happen. Someone made a terrible mistake, and it’s not worth storming the castle with pitchforks and torches. No one should lose their job for this.

But this was a mistake that could have easily — EASILY! — been prevented.

All you have to do is be curious, and be willing to educate yourself. 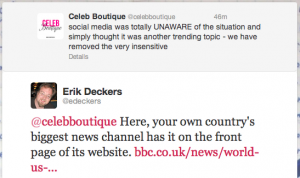 Their first follow-up tweets are the first indication that curiosity is not something CelebBoutique’s social media staff holds in great quantities.

“We didn’t check what the trend was about.”

How do you not check this? How can you not be the least bit curious that some word is trending? Why was the first thing that popped into your head about you and your dress, and not “gee, I wonder why that word is trending?”

This is where people need to think like journalists. A journalist never reports on a story that he hears from one person. A newspaper reporter doesn’t write a single sentence until she has confirmed everything her sources tell her. And they never, ever fire off a comment without knowing a single thing about what they’re talking about.

Wonder why something is happening, and don’t just fire off the first thing that comes into your head, like an 8-year-old.

Otherwise, you pull a boneheaded move like this, and all the goodwill you and your company have worked for will be shredded and ground into the dirt.

I was given the chance to give a talk at the first ever TEDxFortWayne event in May 2012, where I talked about how the Internet has given us a chance to do community better than we’ve ever done before.

It was the first year for the TEDxFortWayne event, and I was very proud to be one of their speakers. (It’s still one of my favorite talks.)

When the Internet first started becoming popular, people worried that it would destroy our sense of community. If anything, it’s actually helped us find a better community of people we like and want to get to know.

What those nay-sayers didn’t know is that this has been a continuing complaint about television, radio, air conditioners, cars, and the loss of front porches on our homes.

Instead, think about those weird and esoteric things we love to do (or our kids love to do). When I was a boy, in 1977, my weird thing was beer can collecting. It was only by accident that I discovered there’s a whole community of people who loved collecting beer cans. Now, thanks to the Internet, you can find websites, a national organization, regional groups, and conventions all over the world devoted to this one interest.

There are marble collectors, anime cosplay fans, people who love vintage baseball, punk rock knitters, wood carvers, first edition book collectors, fan fiction story writers, typewriter collectors, and anything else you can think of. The Internet has given us our tribes and brought us together in a way that front porches and neighborhoods ever could.

Watch the TEDxFortWayne video to see why the Internet may be giving us a better community than we’ve ever had before.

It’s Friday afternoon, I’m tired, and I want to relax on the couch. But Ben Pollock of the National Society for Newspaper Columnists just made me leap up and race to my computer.

It seems the Jackson (Miss.) Clarion-Ledger is looking for some new columnists. The hitch? They’re not willing to pay you for it. Here’s the invitation from their website:

ClarionLedger.com is looking for Mississippi’s next great columnist. Those with an interest should know from the start, however, that the position is a labor of love – the perfect hobby for someone who cares deeply about the state and its people and who also has a passion for writing.
…
In return for your hard work we will deliver a one-of-a-kind platform – a seat on the front row of the biggest news forum celebrating the great state that we call home. As a ClarionLedger.com columnist, you can write about whatever comes to your mind. Some areas we hope that hold your interest include: politics, family, leadership, community care and involvement, and education.

Anyone who is dumb enough to fall for this one is exceeded in their idiocy only by the person who thought asking writers to write for free was a good idea.

Good writers do not write for free. And good newspapers wouldn’t expect their writers to work for free either, would they?

I guess I just answered my own question, because, you see, the Clarion-Ledger is a Gannett owned newspaper. Gannett, owners of USA Today, the Indianapolis Star, and many other newspapers, is known for cutting staff positions around the country so their CEO can earn the slashed salaries as a “performance bonus.”

But I’m angered by the hypocrisy of this request, and I think it mocks the very tenets of journalism that publications like the Clarion-Ledger (hopefully) cling to, even if their parent organization does not. Here’s what I mean:

The Clarion-Ledger has acted in bad taste and bad faith. Any writer who is worth his or her salt needs to refuse to write for them. All you get for writing for the Clarion-Ledger is the “exposure” of putting your name on your own work on their website. But make no mistake, they will own the work you create for them, and you will not be allowed to benefit from it any further.

If you want to write for free, put your time and energy into your own blog. At least with that, you have the possibility of turning it into something profitable down the road, like a speaking career, a book or two, or even a sought-after information channel that people will pay to advertise on. But don’t fall victim to the Clarion-Ledger’s scam.

What are some different freelance rates that freelance writers ought to be charging? It depends on where you live. If you live in America’s Heartland, where the cost of living is lower, you’ll charge less. If you live on one of the three coasts (that includes Chicago), your rates will be much, much higher.

It always makes me laugh when clients from Out East or Out West think that we aren’t charging enough here in Indiana, because our rates are often 50 – 100% less than what they’re being charged by hometown writers. We’re able to charge so much because our cost of living is so much lower. Rent is anywhere from $600 – $1,200 here in Central Indiana, but in New York, that’s the the cost of a gallon of milk.

But things aren’t as good if they’re not as expensive, so the smart freelancer raises his or her rates to meet expense expectations when the client is from Away. END_OF_DOCUMENT_TOKEN_TO_BE_REPLACED

Yesterday’s clarification by Judge Marco A. Hernandez about treating bloggers as journalists points out the need for bloggers to follow basic ethical principles, especially as it relates to accepting money or requiring payment for our services.

Oregon blogger Crystal Cox had been sued for defamation — and lost — after writing blog posts that were critical of Obsidian Financial Group and its co-founder, Kevin Padrick. Cox had claimed she was a journalist and used Oregon’s Media Shield Law as her defense. But Hernandez decided she wasn’t a journalist at all. The reason she lost, the reason she was deemed to be not “media,” was that she basically tried to get Obsidian to pay her to repair the damage she was causing. As Hernandez wrote: END_OF_DOCUMENT_TOKEN_TO_BE_REPLACED

Hooray, bloggers are real journalists again! Just not one in particular.

Back in December 2011, we learned that a U.S. district court judge had ruled that bloggers in Oregon are not part of the media, and therefore, are not protected by Oregon’s media shield laws.

But Judge Marco A. Hernandez has clarified that he did not mean for his ruling to apply to all bloggers, or at least all Oregon bloggers, only to Crystal Cox.

Cox had been writing critical blog posts about Obsidian Financial Group and co-founder Kevin Padrick, and was sued for defamation by the firm. Cox lost her case after trying to use Oregon’s media shield law as her defense. Hernandez had also awarded Padrick $2.5 million. END_OF_DOCUMENT_TOKEN_TO_BE_REPLACED