Novelists may have the luxury of writing and rewriting their work, but business writers and bloggers don’t. We need to get stuff out, and get it out fairly fast. But the danger is if we put something out before it’s ready, we’ll get hammered by our audience and our bosses. So the natural reaction is to withdraw and not put anything out until it’s good and ready.

I rewrote this once. 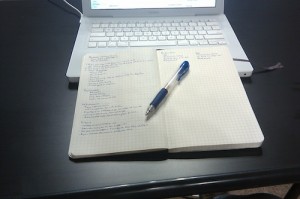 If you’re a blogger or content marketer, you don’t have the luxury of time and, well, more time. You have to get your work out fast. But it can’t be so fast that you put out schlock. There’s a looming content shock, and anything that you put out that sucks will only contribute to the problem. So follow these steps, and your writing can stand above the massive glut of content that continually spews out of the laptops of the “quantity, not quality” content marketers.

For a blog, keep the topic limited to a single idea. One idea, one post, one day. If you try to get more than one idea, your articles will be convoluted and hard to understand.

Shoot for no more than 400 words, but 300 is better. There are all kinds of arguments for and against 500 words, 750, or even 1,000 words. I like 300 – 400 because you can get the most important points of an idea down, and then explore them more in-depth later. (Clearly, that’s not going to happen with this piece, but I do that with my client work.)

Plus, the average mobile phone can display 100 words on the screen, and the average reader will swipe two more times to read something, which equals 300 words.

After you finish your first draft, put it away and wait for several hours. Waiting overnight is even better. Then, go back and rewrite it. I don’t mean start over from the beginning. But don’t be married to every word on the page or think that you have to leave in every sentiment you expressed.

This is where you tear out words, sentences, and even whole paragraphs. If something doesn’t drive your story forward, tear it out. Everything should be about your topic, and nothing else.

It’s major work, and there should be drastic changes between your first and second draft, but don’t start it all over. If you do, the new version is still your first draft.

While you’re still developing your craft, make sure you do a third edit a few hours later. (As you get better, you can skip this step, but plan on doing it for several months, or even a couple years.)

Fix the awkward wording, remove smaller sentences and words that don’t add any value. Remove adjectives and adverbs. (Don’t describe verbs, use descriptive verbs.) If you’re sticking with the 300 word limit, this can really make a difference. Why bloat a piece with 100 junk words? If your reader only wants 300 words total, make every one of them count.

This rewrite is not as drastic as your second one, but it’s still thorough, and we should see some serious changes.

Your problem may be that you’re a perfectionist, and don’t want to let the piece go. Don’t mistake perfect for finished. It will never be perfect, but it will be finished. And if you’re on a fifth, sixth, and even seventh read-through, you’re just stalling. Ship the damn thing and be done with it!

This is the copy editing stage. Look for misspellings, bad grammar, and punctuation. Make sure all the T’s are dotted and all I’s are crossed (I know what I said).

As you’re starting out, this whole process should take about 48 hours, but spread over three days. Write the first draft in the afternoon, after thinking about and ruminating on the topic all morning (thinking about it will help you crystallize your thoughts when you actually sit down to write). The next morning, first edits. That afternoon, second edits. The morning after that, final polish.

Think of it like building a house: the first pass through, you’re putting up the walls and roof. The second, you’re shifting walls around and making some small-but-significant changes to the floor plan, but the outside walls are in place. On the third pass through, you’re putting up the drywall and painting. And on the final pass, you’re installing the drapes and light bulbs.

As you get better, you’ll find you can skip that third step. You’ll be confident enough in your word choices and writing ability that you don’t need so many rewrites. Even so, I still recommend taking about 24 hours to complete a piece. Write it in the afternoon, do rewrites in the morning, and final polish in the afternoon again.

Writing is one of those skills we all learned in school, but many never developed afterward. It’s easy to write, but it’s hard to write well. If you can do these four steps, your writing will become tighter, more interesting, and more enjoyable to read. And you’ll even like doing it.