If you want to be a successful blogger, you need to write like a journalist. In writing style — short words, short sentences, short paragraphs — as well as story flow — important information first, next important, third important, and so on.

But there are a few other journalism techniques you need for your blog if you want it to flow easily, and attract readers’ attention.

My first training as a writer was actually in journalism. It started with my Journalism 101 class at Ball State University, and then being a columnist and reporter for the 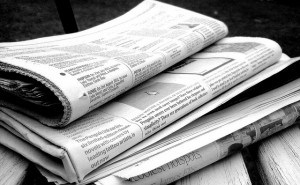 (For historic reference, this was back in 1987, when they were still printing out, waxing, and pasting up all the pages of the paper. This method of newspaper layout is also where the terms “cut and paste” came from.)

I’ve also been a newspaper humor columnist for over 18 years, and was a freelance newspaper reporter for a time. So everything I do is with a journalist’s eye — a jaundiced, bloodshot, narrowed-suspiciously eye. (I keep it in a desk drawer at my office.)

There were four important journalism lessons I learned from those early days of my writing career, which I still use in blogging today.

1. Your Lede Should Contain Everything We Need to Know

First, yes, it’s “lede” (pronounced “leed.”) It’s spelled that way so it’s not confused with “lead” (led), which is what the movable type was made from back in the early, early days of newspapers. Some newspaper reporters will call the opening paragraph the “lead,” but they don’t have a flair for historical drama.

Your lede needs to contain the who, what, where, when, why, and how of the story. We should be able to read that and understand everything we need to know about your blog post. Some of it may be implied, some of it may be understood, but most of it should just be put right out there.

Take a look at my opening lede:

If you (who) want to be (when = in the future) a successful (why) blogger (what = blogger and where = on your blog), you need to write like a journalist (how). In writing style (as well as story flow — important information first, next important, third important, and so on (more what and how).

2. Refer To a Person By Their Whole Name First, and Their Last Name Thereafter

If you mention a person in your blog post, mention them by their whole name, give their title or reason for inclusion the first time. Every time you refer to them thereafter, use their last name only. The presumption is, if the reader needs to know who you’re referring to, they can always scroll back up the story to find their first mention. We do this for men and women alike. The New York Times has their own style of referring to people as “Mr. Deckers” or “Ms. Carter,” but the rest of the journalistic world just uses last names only.

As my Journalism 101 professor, Mark Popovich, explained it: “Imagine your reader came out of a two-year coma this morning and has no idea what’s going on. So they open a newspaper to your story, and this is the first they’re hearing about any of this.”

This means you have to explain some issues, or at least refer back to them. You can’t assume that everyone knows what you’re talking about. You have to assume they’re coming to the issue for the first time in their lives, even if you’ve written about this topic for five years.

And while we’re on the subject, please never use “Unless you’ve been living under a rock, you already know about” or “Unless you’ve been in a coma, you’ve already heard about” as your lede. It’s stupid, and actually a little offensive. I saw that lede in a blog post about some advanced piece on affiliate marketing, and I still had no idea what the guy was talking about even after he was done.

This hypothetical coma patient is why newspaper stories have all the background information at the end of a story, even if it’s a long running story that “everyone knows about.” They explain the details we learned about in the early days of the issue, just in case someone is not up to speed.

For bloggers, that means link to your past posts about your topic, so our coma patient can go back to that story to catch up. (e.g. “I previously discussed the eight writer archetypes back in March.”)

(It also helps if you have the link open up in a new tab, rather than letting them leave the current page.)

4. Spell Out ALL Jargon The First Time In Every Blog Post

I don’t care if you’re THE leading expert in the industry, and you happen to know that every reader who comes across your blog knows exactly who you are and what you’re talking about. You always spell out abbreviations, acronyms, and jargon terms.

Because one day, someone who is not in your industry is going to stumble upon your blog, have no idea what you’re talking about, and they’re going to leave.

It could be our coma patient, or it could be the person who was newly-promoted to the position where they need to give a big fat check to someone with your expertise, but it’s not going to be you, because they have no idea what you do.

If you can make your beginning reader feel smart, without talking down to your advanced reader — and that’s a difficult balance to strike sometimes — you’ll be the person that everyone turns to, rather than just reaching a slice of your potential audience.

Most of our reading habits and reading styles have been shaped and influenced by newspapers. The Boomers and Generation Xers got there by reading actual newspapers. And because that writing style continues on, the Gen Yers are reading the same kinds of news stories online, and being similarly influenced.

Writing and reading styles are still changing as we gather more content online. We skim to read now, rather than reading entire blocks of text.

But one thing will remain the same: journalistic writing is effective for information gathering, because it gives people the most amount of information in the shortest amount of time.

As more people skim to read, if you can write like a journalist, you’ll get more information into their brains