We’re about to be deluged with a flood of content of Noah-esque proportions that could get so bad, we may have to actually pay people just to read our work.

At least that’s what Mark Schaefer is saying.

He says we’re about to enter a period of content shock, which is going to render content marketing unsustainable as a marketing channel. 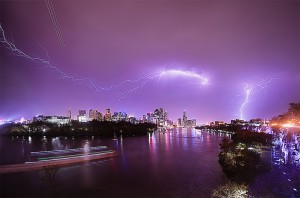 Of course the volume of free content is exploding at a ridiculous rate. Depending on what study you read, the amount of available web-based content (the supply) is doubling every 9 to 24 months. Unimaginable, really.

However, our ability to consume that content (the demand) is finite. There are only so many hours in a day and even if we consume content while we eat, work and drive, there is a theoretical and inviolable limit to consumption, which we are now approaching.

This intersection of finite content consumption and rising content availability will create a tremor I call The Content Shock. In a situation where content supply is exponentially exploding while content demand is flat, we would predict that individuals, companies, and brands would have to “pay” consumers more and more just to get them to see the same amount of content.

I won’t lie. This scares me a bit. Basically, small content marketers who produce good work are going to be buried by Sturgeon’s Law.

(Scifi author Theodore Sturgeon once said “95% of everything is crap.” Actually, he said “crud,” but I like “crap” better.)

Still, in an age of the Walmartization of everything, there are experts and artisans who have survived the onslaught of cheap plastic crap cheapening their work.

If you want to survive the content shock, here are a couple things you need to remember.

You have to write better than everyone else

As much as it pains me to say it, you have to “write good content.” (Even though I still say it’s a stupid strategy.) But it can’t just be “good,” it has to be awesome.

Because most of the content that’s being put out by content marketers around the world is at best, just awful.

The Internet is already one example of Sturgeon’s Law, and we’ve managed to survive that so far. All this means is that there’s going to be more crap, and we just have to figure out a way to stay in the 5%, or even 1%.

You have to start “social media marketing” again

But the content flood means that building relationships and being seen as an influencer is going to become important, even as it becomes more difficult. If nothing else, people will read your work because they trust you and know that you give them valuable insights.

Lately I’ve been seeing a number of people inflating their Twitter and LinkedIn followings as a way to fake influence. They’re chasing numbers and growing their counts, but they’re not actually doing anything important or valuable.

There’s no secret to being influential. You need to start building it three, four, five years ago. If you didn’t, don’t scam your way to the top. Slog it out like the real influencers.

The content shock may be inevitable, but that doesn’t mean you can’t survive it. It means you have to work harder, write better, and be more trustworthy than everyone else. It means adding followers one and two at a time, by building genuine relationships with them.

Let all the hacks and fakers flail away at an ever growing mountain of utter crap. Stick with your own little patch and grow it by by bit. It may not be huge, but it will certainly be more effective and appreciated than those who muddled their way through and never actually contributed anything.