You thought I misspelled Murphy, and you were going to rush in here and catch me, didn’t you? “A-ha, Mr. Grammar Pants! I caught you.”

Except you didn’t. It really is Muphry’s Law.

It’s a variation of Murphy’s Law, “anything that can go wrong will go wrong.” 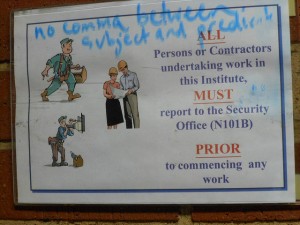 You usually see Muphry’s Law in action when political arguments on Facebook turn into flame wars, which usually turn into finger pointing about how idiotic a person is because they forgot to capitalize the “N” in “Nazi,” and so your entire argument, as well as your entire political party, will crumble because “no, YOUR the idiot!”

I’ve fallen prey to Muphry’s Law plenty of times, especially when I write blog posts complaining about grammar sticklers and their nerdy obsession with using language “properly” but are actually wrong or outdated about their reasons. It’s embarrassing when I write a blog post decrying bad writing, only to find that I made a typo.

The only other people we love roasting more than erroneous grammar bullies are televangelists — the ones who tell us to live a godly life and send them lots of money — who are then either caught with their hands in the cookie jar or their mistress’ blouse. We heap scorn and derision on them the way an obsessive gardener piles manure on her tulip beds.

Similarly, God help you if you ever call someone out for making a stupid spelling mistake only to make one yourself. If there is ever a time to pause, write and rewrite, before you ever submit a comment to anyone, this is it.

Muphry’s Law, like irony, is cruel and heartless, and he will cut you.