I listen to enough writing and language podcasts that I keep hearing certain writing terms bandied about like I’m supposed to know what they are. After hearing some of the same ones over and over, I decided to look them up. And then, because I constantly need to feed this beast, I decided to turn them into a blog post.

These are words that every writer should know, if nothing else, than to explain with a wild look in their sleep-deprived eyes why they do what they do, or at least, how they do it. 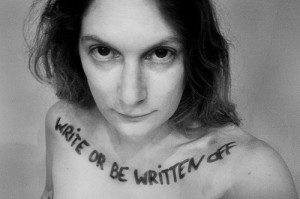 At the very least, it just makes you sound smart at parties.

The manic need to write. This is more than just the weird obsession that most writers have. Wikipedia says “It is not itself a disorder, but can be associated with temporal lobe changes in epilepsy, and hypomania and mania in the context of bipolar disorder.” Don’t worry, if you feel like you need to write all the time, you probably don’t have hypergraphia. You’re just obsessed. True hypergraphia is the overwhelming desire to write, even to the point that you don’t eat, sleep, or visit the bathroom. (Ewwww!) But you can also tell people you have “mild hypergraphia” and watch them edge slowly toward the cheese dip.

Prescriptivists are real bastards about grammar rules and the way language should be used. These are the ones who rend their garments, gnash their teeth, and wail whenever another sacred grammar cow is threatened. Scads of prescriptivists were truly upset when the Associated Press said you can start sentences with “Hopefully,” or when they learned you can end sentences with prepositions.

But Descriptivists — also called linguists — are more concerned with language as it’s actually used by speakers and writers. They’re the ones who shout “common usage!” like it’s a Get Out Of Jail Free card whenever a prescriptivist corrects them on something.

Replacing the name of one thing with the name of something else that’s closely associated with it. For example, referring to “Detroit” when you mean “auto makers;” “Washington” when you mean “politicians, Congress, or the President;” and, “Wall Street” when you mean “those thieving bastards who wrecked the economy.” Hat tip to @RyanBrock, owner of Metonymy Media, for teaching me this word.

A type of metonymy where a specific part of something that is used to refer to the whole. “The White House” when you mean “the President and his staff;” “graybeards” as “a group of old men;” or one that I’ve been talking about a lot lately, “Coke” when referring to “any carbonated beverage.”

A figure of speech where the words are used in a way to change their meaning. It comes from the Greek verb for “to turn” or “to alter.” I include it here, because metonymy and synedoche are both tropes, as are metaphors and irony (Completely useless trivia: These four figures of speech are considered the four master tropes)

Will these terms make you a better writer? Will they transform and uplift your words into the realm of the powerful and noble?

But are they fun to know because they make you feel smarter? Definitely. Trot one or two of them out at your next writers gathering, and use them in a sentence like it’s the most natural thing in the world. If nothing else, you’ll feel smarter than that smarmy, hatchet-faced Evelyn who’s always prattling on and on about her latest self-published “office romance” novel.