You are here: Home / Archives for All Posts / Marketing / Social Media Marketing

There’s a great piece of narration from the Hitchhiker’s Guide to the Galaxy that talks about how certain words, which were once distasteful and unspeakable, are now perfectly acceptable to say. 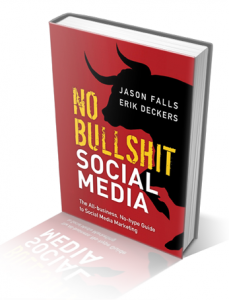 In today’s modern Galaxy there is, of course, very little still held to be unspeakable. Many words and expressions which only a matter of decades ago were considered so distastefully explicit that were they merely to be breathed in public, the perpetrator would be shunned, barred from polite society, and, in extreme cases, shot through the lungs, are now thought to be very healthy and proper, and their use in everyday speech is seen as evidence of a well-adjusted, relaxed, and totally unf**ked-up personality.

So, for instance, when in a recent national speech, the financial minister of the Royal World Estate of Qualvista actually dared to say that due to one thing and another, and the fact that no one had made any food for awhile and the king seemed to have died, and that most of the population had been on holiday now for over three years, the economy had now arrived at what he called, “One whole juju-flop situation,” everyone was so pleased he felt able to come out and say it, that they quite failed to notice that their five-thousand-year-old civilisation had just collapsed overnight.

I feel that way about No Bullshit Social Media, the book I wrote with Jason Falls. I’m not embarrassed by the title. I’m only worried that this is America’s jujuflop: 1) That no one is shocked by the title because we’ve all heard and said worse, and 2) that everyone is so pleased to see it in print that they fail to notice everything else has collapsed around them.

I can’t remember whose idea the title was, but when we pitched it to our editor, Katherine Bull (@katherinebull) and her department, there wasn’t a whole lot of pushback on it. There was some concern over what some of the bookstores might say, but they were all “meh” about it, so we knew we were golden.

I’m proud of the “No Bullshit” title and I’m proud of the work. There’s no question about that (although I won’t let my kids repeat it). And I know there are still some people who, despite my best efforts, will not speak or even write out the name of the title, despite my entreaties that they should honor the literary integrity of the book’s title.

(I actually respect them for this. But that doesn’t mean I’m going to quit trying to get them to say it.)

We picked the title, because that was the only way to describe the approach we were going to take in the book. That, and because we thought Gary Vaynerchuk might want the title . . .And The Horse You Rode In On for his next book.

No Bullshit describes the approach and it describes the attitude. We’re not going to snow you with lilting chants about “be a part of conversations with your customers” or other tree-hugging hippie bullshit, as Jason calls it. Social media marketing is about the bottom line. About making money. About finding a way to turn this free marketing channel into one that brings in revenue.

Because the executives and business owners who pooh-pooh social media as a passing fad or merely for young people are missing out on a chance to make more money, win new customers, and ensure their company’s very survival.

And that’s no bullshit.

I’ve always wanted to have a book cover with a dirty word on it. Nothing horrific, nothing you would find in “those” bookstores with a plain brown wrapper on it. But something a little shocking.

We’re launching this book in October, and it will be found in “real” bookstores like Barnes & Noble, Books-A-Million, and Borders. You can also get it on Amazon.com and BN.com.

As I’ve talked to businesses over the last few years about social media marketing, I run into the same excuses for why they don’t want to use social media:

And we cite statistics and show real-world examples — here are your customers on it; they’re already talking about you; the fastest growing Facebook demographic is women age 50 – 60 — and still run into the same resistance and fears that have been ruling them. The same stupid reasons they gave for the telephone, the personal computer, cell phones, and the fax machine. Customers don’t use it, staff will abuse it, yada yada yada.

No Bullshit Social Media makes the business case for small businesses and large corporations about why and how they should use social media to improve their bottom line. It’s not a strategy-development book, or a how-to book. It’s written at a mid-level view for the C-level and for the small business owner about what social media does and where other companies have used it with great success. It shows what departments you can use it in, and how you make money with it.

Jason and I also want to come to your town and deliver the No Bullshit message in person. We’re putting together a book tour and quickly adding more dates.

If you have a group, organization or business that would like to sponsor a book tour visit, we’re keeping it simple: Travel expenses and 100 books for one of us, travel expenses and 200 books for both. (We can even help you get bulk book discounts.) Give the books away to the attendees, your company, or local businesses. We’ll talk to your group, get them fired up about social media marketing, and even sign books.

I’m thrilled and honored that Jason agreed to write this book, after a late-night text this past December. He’s been great to work with, and I’m constantly amazed at the way his brain works, as well as the Pearson editorial staff’s ability to deal with it. And him.

I’m looking forward to how well you — and the hopefully thousands of business owners — receive the book. Thank you for your support.

After reading a few of the different posts about social media experts, including ours, our partner and founder, Mike Seidle (@IndyMike), wrote this response:

First, I am not a social media expert. I do sit on the board for a company that has several people that I would classify as experts on the payroll. Anyone who is saying “there are no social media experts” falls into one of two groups:

In the end, anyone who claims that social media experts are like the tooth fairy, Santa Claus or the Easter bunny ends up looking pretty silly:

Executive: So, you are here for the social media director position. I see here you’ve been using social media for two years. What makes you an expert?

Social Media Not Expert: There are not experts in social media. We are all explorers at sail on an undefined sea filled with incredible wonders and indescribable dangers. You see, no one can possibly be an expert on social media since it changes so fast. What I learned last year has no application to the future, and the tools we use and strategies we build often are rendered obsolete in the blink of an eye.

Executive: So, if it’s not possible to be an expert, then why are companies shelling out bucks on social media people?

Social Media Not Expert: Well, social media can get incredible results. Most social media campaigns fail because they are not well planned and are mismanged. On top of that it’s impossible to measre the ROI on social media… so do not count on predictable ROI or even expect a return you can measure. But social media will greatly enhance your brand. That’s why most companies are doing social media.

Executive: So, most social media campaigns fail for lack of management or knowege. I can’t expect any ROI, and you are not an expert. Right?

Social Media Not Expert: Well, when you put it that way… it doesn’t sound right. I would say that I’m not an expert, but I have experience and can guide your company around making mistakes that will make your social media campign fail. While we can’t …

Executive (Redfaced, Cuts off Social Media Not Expert): The door. Use it. Use it now.

I’ve been spending time at the Indianapolis Motor Speedway as a racing blogger this year (my 3rd year). I had a chance to interview Paul Schmidt, the director of account services at Blue C Advertising, an advertising and PR firm in California.

He was there to support one of their clients who were sponsoring a few drivers in the 500. They had organized a contest for their client as a way to build traffic and name recognition for their client. At the time, the contest had yielded 2,500 new “likes” on their Facebook page, and nearly as many members in their text club.

Sports marketing is a different animal from regular marketing, in that you’re selling a product that — unless you’re working directly for a league or team — you have to center around a particular event or other organization. In Paul’s case, they had to promote a very specialized niche product to the audience most likely to appreciate what the company, racing fans.

While there are media outlets and TV shows about street racing, this is a way to use a marquis event like the Indy 500 to create a special event and celebratory feeling about the product. Combine that with a special promotion as a way to launch a new product, and you can see how interesting (and difficult) sports marketing/advertising can be.