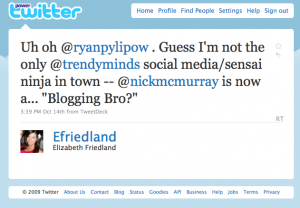 Never doubt the power of a few well-connected people, or a confluence of timing, technology, and information, to have a huge impact on events around the world. I got to witness one of these events firsthand, and even played a very small role in it. You may remember it. It turned out to be one of the biggest lead-contaminated toy recalls in 2006, and one of the first in a long series of Chinese toy recalls that year.

In June 2006, I was working at the Indiana State Department of Health as the Risk Communication Director. Basically, I was in charge of crisis communication, or as I called it, “oh shit” PR.

That’s because whenever some emergency or crisis came up, those were the first two words any of us usually said. We all did, the public affairs staff, the epidemiologists, even the Emergency Response department. Whether it was a Hepatitis A scare at a Pizza Hut in Fort Wayne, salmonella in a Wal-Mart in Johnson County, or a national outbreak of salmonella in peanut butter, we all had the same response when we first heard the news of the latest public health crisis.

I had been working on the job for about three weeks, when I was called down to Legal because “we have a problem.” My first “problem,” in fact. When I showed up, there were eight people sitting around a conference table. They filled me in.

As part of a summer reading program, the Monroe County Library in Bloomington had been giving away bendable children’s toys which were discovered to be dangerously contaminated with lead. The children’s librarian and the lead prevention nurse at Monroe County Hospital had sent samples a couple months earlier to the Consumer Protection Agency, but no one had responded beyond an initial phone call.

Rather than giving up, they then contacted the State Health Department, hoping that someone, anyone, would pay attention to the fact that they had just given out a bunch of lead-contaminated toys, and could we please help them get the word out to their community?

Happily, I didn’t utter my little mantra out loud.

Turns out, another library in another county had also been giving away these toys, which made this a statewide issue. So we decided to send out a press release to all the state media outlets, and see what happened. That afternoon, I answered a few reporters’ questions, and then forgot all about it.

Three days later, I received a call from the director of the New Jersey State Library Association.

It turns out the Muncie Star-Press had run our story, which was then picked up by a librarian blogger. The director read the blog and nearly freaked: they had been giving those toys to a statewide children’s reading program all summer.

Guess what I said, out loud, over the phone.

“I don’t know, I’ve been doing this job for three freaking weeks!” I wanted to shout. “This is my first real crisis.”

Instead, I ran through the talking points we had given out to the media, and gave him a few recommendations.

“Could you email that to me?” he asked. “I belong to a listserv group of librarians around the country. I think several of us have been giving out these toys. I can pass it on to them.”

I emailed the talking points and recommendations off to the guy, and then forgot all about it again. Two days later, I received another phone call from the Orange County Register.

The reporter said that several of California’s libraries had been giving away some toys that were found to be contaminated with lead, and since we were the ones who had started this whole thing, did we have any information we could give them?

I explained how the whole thing had started with the nurse and librarian in Monroe County, and how this was apparently being felt in a couple of states now.

As the days went by, I would go online to see who else had been recalling these children’s toys. Within 24 hours of the OC Register call, the story exploded. Several librarians on the librarian listserv had called their local media with the same story. In a couple cases, someone in one city would read the story and tell their librarian friends in another city, who would then find the listserv information, and call their media outlets.

The tipping point came when the Associated Press sent a national story over the newswire, and local reporters called their local libraries to see if they had those toys. The librarians would go pale and whisper my two words. A quick check always revealed the very same toys for the very same children’s reading program.

A few weeks later, a check of Google News showed something I had never expected: a recall of 385,000 lead-contaminated toys from all 50 states, and more than 530 news stories in the United States, Canada, Germany, England, Italy, India, and Taiwan. And two field agents from the Consumer Protection Agency were suddenly very interested in some bendable toys they had received several months earlier from two women in Bloomington, Indiana.

As I look back on this story, I am struck by one very important lesson: this did not become a national recall just because of traditional media. They had help. What really kicked it off is that a blogger saw an article in her local paper and wrote about it. Then a guy on an email listserv sent it out to the other members. Old-school media played an important part, but it was the new media that really pushed it in the right direction.

All because a librarian blogger was connected to a guy on a librarian listserv. But more importantly, because a nurse and a children’s librarian decided that they needed to speak up about an issue in their hometown, and didn’t quit until someone heard them.