Last night, I watched Stephen Fry (@StephenFry) on the Late Late Show with Craig Ferguson (@CraigyFerg), in an audience-free show where the two chatted for almost an hour about some intelligent stuff. That’s when Fry said something that — to me, the wordsmith — just floored me.

If an alien was looking down on us, and inspecting our language, they would see that the worst thing we do on this planet is we torture, we kill, we abuse, we harm people. We’re cruel. And those are the things at which we should be ashamed. Amongst the best things we do is we breed children, we raise them, we make love to each other, we adore each other, we’re affectionate and fond of each other. Those are the good things we do.

They would say that how odd that the language for the awful things we use casually. ‘Oh the traffic was agony, it was hell, it was cruel, it was torture waiting in line.’ We use words like ‘torture.’ That’s the worst word.

And yet, if we use the F-word, which is the word for generating our species, for showing physical affection one to another, then we’re taken off air and accused of being wicked and irresponsible and a bad influence to children.

Words have power. They have impact. If I call you a rotten f—er (see, I can’t even use the word, because I might offend someone), that has real power. It’s a verbal slap to the face, soon to be followed by a real one.

But if you’re giving me hard time and I say, “you’re killing me,” we laugh at that, like it’s somehow funny that your minor inconveniences are going to result in my eventual death.

Don’t get me wrong, I love dark comedy and morbid humor. There’s something liberating to be able to laugh at the things that scare us. But there’s a line I don’t like to cross, and I’ve been thinking for a few months about where that line is.

It’s somewhere around the phrase, “drink the Kool-Aid.” We use that phrase in business without a thought. It means undying loyalty. If you “drink the company Kool-Aid,” you’re a company man through and through. You’ve bought into management’s vision, and you’ll follow it to The Bitter End. We throw this phrase around without a thought. 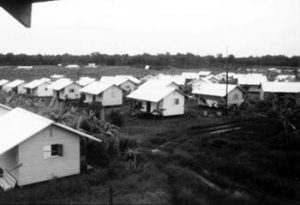 It comes from one of the largest mass suicides in all history — some people call it mass murder — where more than 900 people died in Jonestown, Guyana. It was the day Jim Jones persuaded (or forced) all 909 members of his cult to commit suicide by drinking cyanide-laced grape-flavored Flavor Aid (not Kool-Aid).

I was 11 years old when Jonestown happened. I remember the footage and photos of the bodies. I remember grownups talking about it. In some ways, it’s all the more shameful for us Hoosiers, because Jim Jones got his start right here in Indianapolis. (Click the link above if you’ve never heard the story.)

So I don’t say “drink the Kool-Aid” at all. It’s a horrible phrase about a horrible event created by a horrible man. And to toss it around like a punchline, a throwaway phrase to use in a motivational speech, is repugnant.

And this one phrase illustrates Fry’s point so well: we casually throw around the language of violence like it’s no big deal. We say “drink the Kool-Aid” in board rooms and coffee shops because we think it means “I was persuaded” or “I would follow that person.” All the while not realizing what it actually means.

But we get embarrassed and throw a royal fit when a woman’s nipple is shown on national TV for a fraction of a second. We’re upset by a brief glimpse of a small segment of a woman’s body, yet we think nothing of talking about torture — the “worst word,” Fry called it — and suicide bombings and war and beheadings on the evening news while our kids are in the room. That’s somehow okay, but we fine TV stations millions of dollars because Janet Jackson got a little extra publicity.

(Now, I understand your initial reaction might be to talk about the rampant over-sexuality of our culture, and how our kids shouldn’t be exposed to that sort of thing. And I won’t disagree with you a single bit. Frankly, I don’t want my kids seeing Janet Jackson’s nipple during the Super Bowl either. But that’s not my point. So, if that’s your response, then you’ve completely missed the boat. Go back to the beginning and start over.)

My point is that language is powerful. One of the most powerful weapons we have. It cannot be used casually. We shouldn’t toss words and phrases, like “drink the Kool-Aid,” around without thinking about the meaning behind them.

In social media circles, we talk about the creation and exchanging of ideas. Yet language is the biggest, most important idea — ideal? — of all. To treat it so thoughtlessly harms it. It reduces our values and ideals to afterthoughts and punchlines.

Bottom line: stop saying “drink the Kool-Aid.” Because it makes light of one of the biggest murder sprees in the last century, and you’re trivializing what it means.

Here’s the segment of Fry and Ferguson’s conversation. The quote above comes at around the 8:00 mark, but it’s worth watching the entire thing.