I was once sitting at a meeting where an interesting question came up, so when I got back to my office, I wrote a blog post about it, and it was up an hour later.

“How did you get that up there so fast?” someone else from the meeting asked.

“Well, I had to drive back to the office first,” I said. 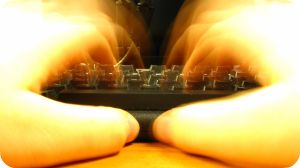 My friend thought I was being a smartass, but that’s actually how and why I was able to write that blog post.

I’ve gotten to the point where I can write most things very fast. It always seems to surprise people, but it’s actually not that hard. Here are my three secrets (plus one bonus) to writing fast:

1. Write when you’re not in front of the computer

Remember, writing is not an activity you must perform with a laptop computer. That’s typing. Writing is the act of putting the right words into the right order.

That means you can write anywhere, at any time. I write when I’m in the car. I think of the basic ideas of my piece, how I want to lay it out, and any points I want to make. The blog post I mentioned earlier was one I was actually able to write in 30 minutes, because I thought about it for the entire 15 minute trip in my car.

You can write in the car, in the shower, going for a walk, or any other time you don’t have to engage the language portion of your brain somewhere else. That means you shouldn’t do it when you’re having a conversation, watching TV, or listening to talk radio.

I wrote this blog post in my car on a recent road trip.

Whenever I have a cool idea, it will often get stuck in my brain, and won’t let me work on anything else. So I write it down in my notebook, which frees it from my head, letting me work on something else. Once I do this, it also reboots my brain so I can start sketching out that idea a little better.

If I want to work on an idea for an article or post, I write down the three main points I want to make, and then think about it in the car. With that tiny bit of pen-and-paper work, I open up any logjams in my head, and I can think about the piece a lot more effectively.

Do you talk to yourself in your mind? Do you have an inner monologue going in your head? (Don’t lie, I know you do.)

What tone does it take? If you’re like most people, it’s conversational. You talk like you, well, talk.

And yet, most people try to write very formally, using big words and lo-o-o-ong sentences. They ignore their inner monologue, and channel their Inner Professor. As a result, it takes three times longer than it should to write something. They think of the word they would have used, and then think of the bigger, “smarter” word instead. Since they’re not used to writing that way, or even speaking that way, it slows them down.

If you want to write fast, write like you talk. Get your inner monologue to sound more like your public speaking voice, using the language you use in real life (assuming you’re not a chronic cusser). Imagine speaking your words out loud, as if you were giving a speech to a room full of your friends and colleagues.

After a while, you’ll be able to sync your speaking voice and your writing voice, and you’ll write down what your inner monologue is saying, exactly as it’s being said. This will save you all kinds of time from trying to use your formal writing voice when that’s something you should have left behind when you graduated from college.

BONUS: Learn how to type fast

This may seem hardly worth mentioning, but once you start doing these other things, you’ll find that you may not be able to type fast enough to keep up with your brain. If you’re still typing with two or three fingers, and cannot touch type, learn it.

(Note: If you’re still battling with the traditional QWERTY keyboard and are clocking in at 50 words per minute, consider switching to a Dvorak keyboard. I still use the QWERTY, because I can type 90 wpm; Randy Cassingham says that if you can type that fast, you won’t be any faster on the Dvorak. But if you’re running at half that speed, take a few weeks to learn the new keyboard, and you’ll find you’re blazing fast.)

Otherwise, what will happen is that you’ll find your fingers are moving slower than your brain, which means your brain will not only outrun your words, but you’ll find that you’re forgetting what you were going to say. You’ll have to stop and try to remember what it was, which is a big drag on productivity.

While there are plenty of writers who still prefer to write with a pen on a notebook or note pad, because they like to “be in the moment,” I have retrained my brain over the years to function better in front of a keyboard. This is where I do my best work. And it saves me plenty of time to be in the moment for other things later on.