You are here: Home / Archives for Joseph Heller

Yesterday, we covered the first half of 10 Blog Writing Lessons Learned from Authors. Here are the next 5 lessons I have learned from some of my favorite book authors.

6) Not everything is going to be a hit — Joseph Heller. Heller wrote 7 novels, and 6 of them were not critical or commercial successes His very first one, Catch-22, is considered one of the best books of the 20th century, and is my 3rd favorite book. It was hysterical, absurd, and filled with enough satire to make George Carlin weep with envy. The rest didn’t do so well, but he kept writing. He wrote 3 plays, a series of short stories, and 3 screenplays, all of which had some success, but never reached the pinnacle of Catch-22.
Still, Heller didn’t go all J.D. Salinger on the literary world. He kept trying and plugging away. You’re not going to hit a homer with every post you write, so don’t give up. (But hopefully you’ll have a better success ratio than 14%.)

7) Piss people off — Anthony Bourdain — The Nasty Bits. Anthony Bourdain is great at pissing people off. He will unleash his ideas and his venom on anyone who gets under his skin. I just finished reading The Nasty Bits, and he has a go at everyone from fast food burger joints to fat people on airplanes to pretentious food snobs like Woody Harrelson, who will only ever eat raw fruits and vegetables, no matter where in the world he is who it inconveniences, or which restaurant owner he insults. Bourdain doesn’t pull any punches, and is willing to put even his more acerbic views in writing. You should too. (And don’t be a such a raw food jerk, Woody.)

8) Know the grammar rules. . . so you can ignore them — Elmore Leonard. Someone once told me “you can’t start your sentences with ‘and.'” I pointed out that things had changed since she was in 5th grade English — like the invention of the printing press — and that people have been starting sentences with “and” for a few decades. And since I was the professional writer, I ignored her. I have since found this quote by Elmore Leonard, and keep it in my notebook for future encounters: “(I)f proper usage gets in the way, it may have to go. I can’t allow what we learned in English composition to disrupt the sound and rhythm of the narrative.”

9) You have to go to where the action is — Ernie Pyle. Pyle died doing what he loved: writing. He was a correspondent for the Scripps Howard newspaper from 1935 – 1945, when he died in combat. Pyle actually won the Pulitzer in 1944 for his work, and became the patron saint of newspaper columnists and the National Society for Newspaper Columnists(I was a member for a couple years). But the only way he could have done all this was by being where the action was. You don’t have to put yourself into dangerous combat situations to write your blog, but you do have to get out from behind your computer, and see the things you’re writing about. When you use photos, use your photos. When you write about places around the globe, write about your visits. It’s one thing to write about things you’ve found on the web, but try getting out in the world and see what inspiration you can get out there.

10) Humor makes you memorable — Dave Barry. It’s the humor writers, not the political columnists who are the most remembered by their readers. I know people who still remember Dave Barry’s piece on the Lawn Rangers precision lawn mowing team or the time he played a corpse in the Eugene (Oregon) Opera’s production of Gianni Schicchi. No one remembers the piece David Broder wrote for the Washington Post about the guy who did the thing at the place. They remember things that are funny. So, if you can pull it off, use humor in your posts. If you can’t, avoid it, because otherwise people will remember you, and not in a good way.

I have a few favorite authors that I turn to again and again. Authors whose books I kept when I got rid of 600 other books over a two week period. And while most of my bibliophile friends 1) can’t imagine doing that, and 2) are wondering why I didn’t call them first, I’ve enjoyed being free of most of my old and unread books.

But I’ve kept these authors’ books because I learned something from them. A lot of these writers, and one singer, have imparted lessons to me, either through their writings or their interviews. So here are 10 lessons I have learned from 9 of my most favoritest authors (and 1 singer).

1) Pictures speak volumes — Kurt Vonnegut, Breakfast of Champions. Anyone who ever read Breakfast of Champions will remember the crude, childish drawings he included in his story, including a couple of drawings of people’s anatomy. I’m not suggesting you use these particular drawings, but rather, use pictures and videos to support your point and make your post more interesting to readers. Load your photos into Flickr or Picasa, or use Creative Commons or stock photos, and use them to add a little variety to your posts.

2) String together a series of ledes – Hunter S. Thompson. This is why Hunter S. Thompson was such a powerful writer. In journalism school, students are taught to write one lede (lead, if you must), and then supporting information, and the content gets less important and less interesting the further you go. But Thompson would just string together a bunch of ledes, one after the other — bam, bam, bam!! — and pummel you with them. Then he would calm down a bit before hitting you again with another series of body blows. That’s why he was so exciting to read. That, and all the crazy drug references.

3) Write short sentences — Ernest Hemingway, Big Two-Hearted River. I use this sample a lot in my writing presentations.

Nick was hungry. He did not believe he had ever been hungrier. He opened and emptied a can of pork and beans and a can of spaghetti into the frying pan. “I’ve got a right to eat this kind of stuff, if I’m willing to carry it,” Nick said. His voice sounded strange in the darkening woods. He did not speak again.

I checked this out once on the Flesch-Kincaid reading level, and it came back as a 3rd grade level block of text. Newspapers are written at about a 6th grade reading level, and your blogs should be too. Not because your readers are dumb, but because they have come to expect it. They want short, simple, and easy to understand. 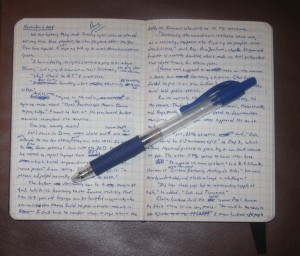 4) Write long, flowing, descriptive sentences — Roger Angell, baseball writer for The New Yorker. Yes, this contradicts my previous point. I’ve been reading Roger Angell for about two years now, and he is quickly becoming one of my favorite writers. His descriptions of baseball games are magical. I can feel like I’m there in the park with him, in 1965, watching a Mets game, or in 1969, watching the Detroit Tigers. His writing flows smoothly, like an expensive new pen on creamy writing paper. There are times your writing will need to be more like Angell’s and less like Hemingway’s.

5) Use metaphors —Tom Waits — Putnam County, Nighthawks at the Diner. I talked before about how Tom Waits uses metaphors to create very powerful writing. His song, Putnam County is rife with metaphors and a couple similes. Take a look at what he says about the morning dawn.

And the impending squint of first light
And it lurked behind a weepin’ marquee in downtown Putnam
Yeah, and it’d be pullin’ up any minute now
Just like a bastard amber Velveeta yellow cab on a rainy corner
And be blowin’ its horn in every window in town

My point is that you should sprinkle metaphors into your writing to create the drama, vivid imagery, and power that will make your writing stand out from everyone else’s.

We’ll cover the 2nd half of this list tomorrow.