You are here: Home / Archives for ghost blogging

The online newsies of the world all pointed and shouted with excitement, “See?! SEE?!” when AOL bought the Huffington Post new blog for $315 million. Newspapers and journalists all hunched over and typed a little faster when they heard the news, hoping they too could be the next major acquisition by the online giant-emeritus.

But it’s only recently that people began realizing that Huffington Post built its success on the backs of unpaid writers — writers who want to be compensated, even just a little, by the news source they built. (Simon Dumenco has a good wrapup of how Huffington Post is screwing their writers.) I understand the appeal. The writers were promised the one thing every startup publication offers plenty of (but usually has none): exposure.

“We can’t pay you, but we’ll put you in front of all of our readers,” they promise. “Once we start to get money from ad revenues, then we’ll start paying you for future articles.”

But Huffington Post aside, those 9 million other magazines and newspaper startups never see enough revenue to pay for the celebratory kickoff party, let alone paying the bankruptcy attorney when they fold three months later. Besides, it doesn’t sound like HuffPo ever offered money. Ever.

It’s real simple, writers shouldn’t write for free. In that link, scifi writer Harlan Ellison rants about how writers are constantly getting the short end of the payment stick, thanks to the mistaken idea that what we do is somehow easy.

What we do is not easy. We’ve only done it for so long, we make it look easy. It still takes work to string together 500+ words, make sure they’re spelled correctly, are coherent thoughts, and are assembled into something that’s both easy and enjoyable to consume. (If you think it’s easy, take a whack at 500 words on any topic, and send it to me for an “honest but thorough” critique. I dare you.)

Look, if you want exposure for your writing, and you want to write for free for Huffington Post. Go ahead. But don’t do it in the hopes that they’re going to come up with a little thank you gift for all your hard work. You knew it was free going in, and that was the deal you made with them.

I don’t mean to sound unsympathetic, because I can’t tell you the number of times I’ve been screwed by an editor or potential client. I fervently believe that Huffington Post should do the nice thing and show a little love and gratitude to the people who made them worth $315 million, but I don’t think it’s something they have to do. Not because it’s their party, and they made the rules, but because the writers never had the expectation of getting paid, and went into the relationship fully expecting to never receive money.

(Update: One friend who runs a very popular community blog said if he gets a front page placement on Huffington Post, his site get 10,000 – 50,000 extra visits from the story. Otherwise, he runs around 2,000 extra visits. For a site that makes money from selling advertising, writing for free for Huffington Post is worth it, because it helps him serve up more ads, which makes him more money.)

If you want fame and exposure, write your own blog. Work your ass off in that niche, become famous, and work on your personal branding to find new readers. Then leverage that into paid bylines in real print publications, public speaking gigs, and even a book, like say, one on personal branding (affiliate link).

While that strategy is much, much harder than knocking out a few blog posts for Huffington Post, it also protects you from being totally screwed when the website is sold to a giant conglomerate and you don’t get anything. At least when you’re writing your own little blog, you’re getting nothing anyway, but without the painful screwing that the Huffington Post writers just experienced.

There’s no reason you have to write for someone else, especially when all you get is a byline. Thanks to all the different free blogging platforms that are available — Blogger, WordPress, Posterous — you can have your own blog and write for free to your heart’s content. And when someone makes an overture to buy you for $315 million, you don’t have to share it with anyone at all.

My book, Branding Yourself: How to Use Social Media to Invent or Reinvent Yourself (affiliate link), is available on Amazon.com, as well as at Barnes & Noble and Borders bookstores. I wrote it with my good friend, Kyle Lacy.

With all of the controversy that seems to swirl around the acceptability of ghost blogging, I realized we weren’t really arguing about the same thing. The acceptance seemed to be based on their definition of the term.

Is it writing a blog post with the full input approval of a client? Or is it writing a post that doesn’t have any input, but does have approval? As I read descriptions and arguments by Jason Falls, Lindsay Manfredi, and other blogging luminaries, I realized it was the definition that was the problem.

So we created a short little survey to figure out what the most widely understood definition of ghost blogging to be. Survey respondents were given 5 different options of what ghost blogging might entail, and then asked to rate them on a 5 point scale (1 = strongly disagree; 5 = strongly agree). These are the results out of 51 responses, out of a 5 point scale*:

(*These numbers won’t add up to 51 in this description, because I left the “neither agree nor disagree” out of this text for simplicity and brevity. The actual numbers are at the bottom of this post.)

From these results, we can infer a few basic ideas about ghost blogging’s acceptability:

So, that is our baseline for acceptable ghost blogging. The next step is to find out how strongly people feel about it, and see if we can get a bigger group to respond. More on that later. 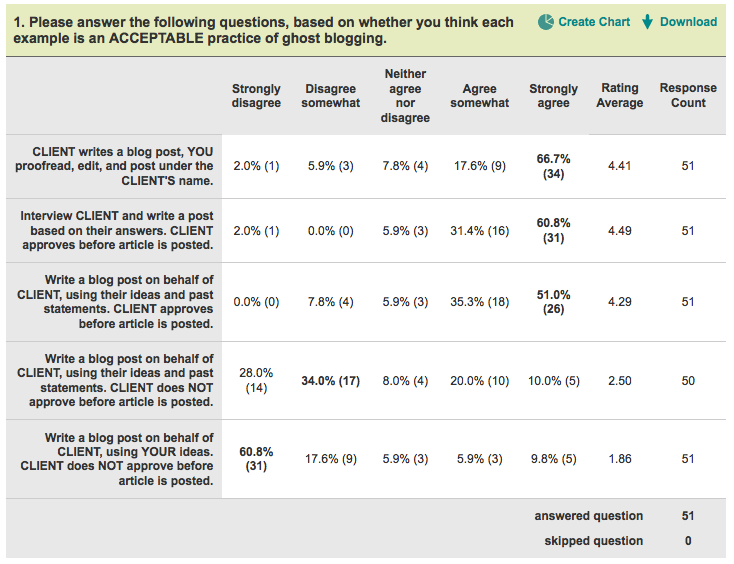 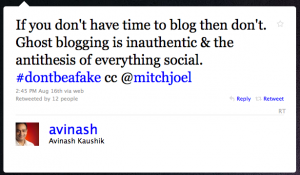