You are here: Home / Archives for advertising

We’ve had years of practice, thousands of articles written on the rights and wrongs, and millions of social media “experts,” but we still have content marketers and copywriters making the same stupid, amateur mistakes they’ve been warned against.

Now everyone seems to think the current pandemic shutdown somehow changes all the rules, and everything they’ve been told not to do is now fair game.

Not at all. In fact, if anything, this crisis means you have to really buckle down and quit making them.

1. Stop saying “In these troubled times”

Good Lord, if I see “in these trying/terrible/troubled times” once more, I’m going to Hulk-smash my laptop!

Twelve years ago, during the Great Recession, I had a freelance copywriter who used “in these trying times” or “in these economically troubled times” in every single article they handed in for the next four years, even when things were on the upswing.

Bottom line, do not refer to “these troubled times” at all ever. It’s one of the most useless and overused writing clichés in the entire world. 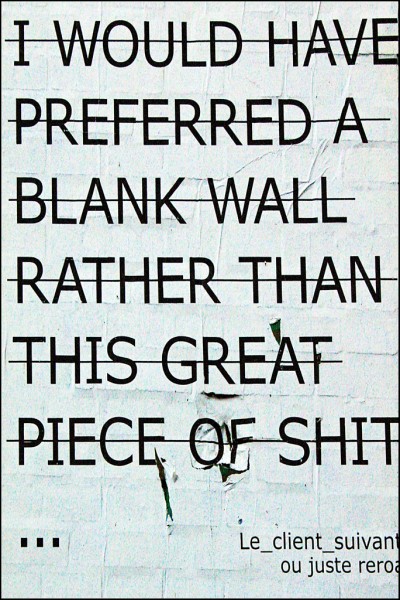 I’ve seen plenty of emails explaining what a particular company’s response to COVID-19 has been. Some, like my favorite coffee shop or pizza place, are explaining what steps they’re taking to protect customers, because they know that we’re affected by the things they do and don’t do.

Other companies, like software companies I haven’t heard from since 2012, are telling me the steps they’re taking to shelter in place, practice social distancing, and blah blah blah.

Seriously, Chad? You’re just a software company. No one cares.

The only reason you should send an email about your COVID-19 response is if your response directly affects your customers.

For example, if you have a web hosting company, I want to know what steps you’re taking to keep my servers up and running. If you have a rental car company, I only want to know if you’re going to be open or if I can cancel my reservations. I don’t care how closely you’re monitoring the government’s guidance. Don’t give me a 500-word piece of bullshit that doesn’t tell me anything until the last paragraph. (Read Josh Bernoff’s cutting analysis of Hert’z corporate email.)

And, clean out your email list. If you haven’t heard from certain people in more than four years, maybe you should just remove them.

3. Don’t say anything unless you have something to say

This piggybacks off point #2, but it’s a much broader message. As content marketers, we’re already used to filling up people’s inboxes and social streams. And people are 1) ignoring it and 2) tired of it.

So maybe we should instead shut up and do something useful. People are frightened, anxious, and just trying to take care of themselves and their loved ones. So no one needs more marketing clutter to get people to pay attention to us.

If you want to get people’s attention, do something useful. Offer them something to make their lives easier. Accounting software companies, teach people how to become entrepreneurs, because a lot of people are losing their jobs. Personal finance coaches, create videos, blog articles, and podcasts about how to lower our costs and trim our budgets. Restaurants can offer cooking classes or “ask me anything” sessions.

Some companies are already doing this. My gym, like a lot of gyms, are offering workout-at-home video sessions. My friend the yoga instructor is doing Monday night yoga sessions on Facebook Live. Blaze Pizza hosted a virtual pizza party with their executive chef, Brad, where people could ask him questions and get real-time answers.

But other companies are still sending me emails about booking trips, buying electronics, or buying men’s clothing.

I realize you have to find a way to stay in business, but try being useful before you start being commercial.

For some of you, it’s business as usual. For most everyone else, they’re not buying anything. And yes, it’s hurting the economy. And yes, businesses are suffering and they need a way to stay in business. I’m not saying you shouldn’t.

What you should be doing right now is revamping your old messages and updating them to reflect the new reality we’re going to be facing for the next several weeks.

Case in point, a friend from Indiana posted that she saw a commercial from one of the local TV stations reminding people to check in with them for the local traffic report. That’s fine, except there is no traffic because Indiana is on a statewide stay-at-home order.

While the ad may be a good reminder for people once the order is lifted, it’s still a wasted opportunity. Check your upcoming messages and see if any of them have now aged out or ring a little tone deaf in light of the shutdown.

If you have scheduled your messages days and weeks in advance (which is a bad idea), hit Pause on your drip campaign until you can be sure that everything is still valid, true, and necessary. Take that opportunity to update your messages to better reflect your new approaches (see #2) and any new offers you might have.

5. Never, EVER refer to the “China virus”

We all know what this virus family is called — coronavirus — and what this particular strain is called — COVID-19. Those are the two most widely accepted terms that everyone knows and uses. The media is using them, the CDC and the World Health Organization are using them. It’s only certain government officials who are calling it the “China virus,” and it’s causing a lot of problems for Asian Americans.

Which is made in Mexico. Which is not near China.

So if you use the term China virus, you’re just buying into the same racist dogwhistling nonsense as those other mouth-breathing halfwits. So don’t do it.

Good content marketers are always learning, always improving, always trying to do better. But there are times where we get lazy and settle into old habits and easy cliches just to get through the next assignment. But now is not the time to fall prey to that kind of thinking.

Your customers are counting on you in these troubled times.