You are here: Home / Archives for All Posts / News / Research Desk

Last Friday I tweeted: “I’m easily impressed. I’m not easily flabbergasted. @kabaim just flabbergasted me. Follow him and ask how he did it.”

@kabaim is Eric Kim, founder and CEO of Twylah, the new Twitter tool that Eric says is going to change the way we use Twitter. Twylah (@Twylah)does all these amazing things. So many of them, in fact, that I’ve probably forgotten a few them here.

Imagine going to a website that’s laid out like a magazine theme for a blog. On that page are your tweets, categorized by the topics you tweet about most. There, a visitor can see those categories, and read more tweets within each of them. The layout page will pull out any photos you’ve included with your tweets, and then organize the rest in reverse chronological order.

This does a number of things for you, for the reader, even for search engine optimization. 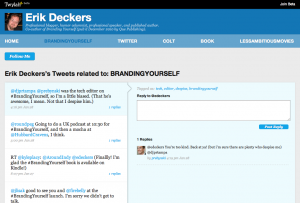 These are all pretty cool features, and based on my scribbled notes, there’s a lot of amazing stuff that Twylah is going to do.

But, there are three things that social media marketers and practitioners need to take note of, because these things are going to be H-U-G-Efor social media professionals. Of course, these will not be included in the initial rollout of Twylah, but Eric expects them to be available around 6 weeks later. (I hope I didn’t just jinx that.)

A lot of these way cool Twylah features are still in the Alpha stage, while Eric and his wife, Kelly, are working feverishly to roll the beta out in the middle of February. If you want to be a part of the beta, go to Twylah.com and register. Also, ask Eric for a personal demonstration of Twylah.

You’ll be flabbergasted. I know I was.