As David Ogilvy once said, jargon words “are the hallmarks of a pretentious ass.”

And that’s how I feel when you use handshake as a verb when you mean to say “introduce.” Or a value add.

Too many business types, especially in the tech and social media world, can’t stop sounding like the Dack.com Bullshit Generator. They say things like “disintermediate bleeding-edge paradigms” and “synergize mission-critical infomediaries” without actually knowing what they mean.

(Seriously, go check out the Bullshit Generator and build your own sentence. Pick one term from each of the three columns, and you can generate phrases like “we matrix cross-media web-readiness.” 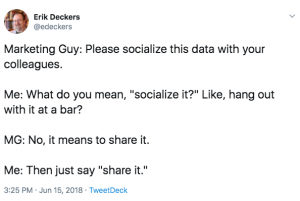 Very rarely do bullshit words make effective jargon. There are some words that we use that started out as jargon words — Jeep, radar, scuba — but those are words that actually made communication easier. People got tired of saying “self-contained underwater breathing apparatus” over and over.

And I understand that we need things like acronyms and acrostics to shorten some industrial terminology, like how emergency responders have to go through “NIMS” training, which refers to National Incident Management Systems. No one wants to say that every time.

But until and unless you can convince me that “on the go forward” is better than “from now on,” keep your bullshit jargon words where they belong: in an iron box that gets rocketed directly into the sun.