One of the rules of promoting your personal brand is to help other people. If someone asks for help, you give it. You don’t keep score, expect a return favor, or hold it over their head.

And you certainly never, EVER scream at the other person or make them feel like a schmuck for looking up to you or hoping you’ll take five minutes to help them.

But Cleveland communication pro, Kelly Blazek, broke that rule when she sent several furious emails to young professionals who asked for a connection and subscription to an email job board she offered 7,300 other Clevelanders.

Diana Mekota received one after asking to be included on Blazek’s email list, and to connect with her on LinkedIn.

Apparently you have heard that I produce a Job Bank, and decided it would be stunningly helpful for your career prospects if I shared my 960+ LinkedIn connections with you — a total stranger who has nothing to offer me. Your invite to connect is inappropriate, beneficial only to you, and tacky.

Your invite to connect is inappropriate, beneficial only to you, and tacky. Wow, I cannot wait to let every 25-year-old jobseeker mine my top-tier marketing connections to help them land a job. Love the sense of entitlement in your generation. And therefore I enjoy denying your invite, and giving you the dreaded ‘I Don’t Know’ [NAME] because it’s the truth.

Oh, and about your request to actually receive my Job Bank along with the 7,300 other subscribers to my service? That’s denied, too. I suggest you join the other Job Bank in town. Oh wait – there isn’t one. 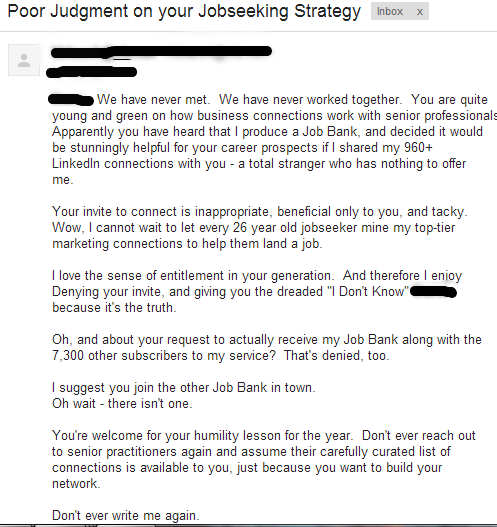 She wrote at least two other hateful emails to people who she believed were not good enough for her network.

Blazek’s responses are wrong on so many levels, and she says she knows that now (after she got blasted on social media, and her emails became an international story). She wrote an apology, and I’m inclined to believe it, but I think she’s damaged her reputation pretty soundly. There’s even a move to have her stripped of her 2013 Communicator of the Year award from the Cleveland chapter of the International Award of Business Communicators.

How Good Networking Is Actually Done

When you reach a certain position, whether as a professional, speaker, author, or any other visible role in your community or industry, you have to acknowledge that you got there with the help of a lot of other people. You asked people for help, and they gave it. Or better yet, you didn’t ask, but received it anyway.

People who reach these stages are often excellent networkers. They love sharing and helping others achieve their goals. Good networkers do it without thinking, bad networkers either don’t do it at all, or do it with many strings attached.

In the words of my hero, Mister Rogers, “I hope you’re proud of yourself for the times you’ve said ‘yes,’ when all it meant was extra work for you and was seemingly helpful only to someone else.”

The people who taught me about networking all modeled this idea. They said yes, even when it meant extra work for them. So I do the same for others; I do what I can to teach them to do it for the people who will come to them one day, asking them for the same help.

Networking is never about paying back. It’s about helping others achieve their goals, and teaching them how that’s done. Because one day, when they’re established and have reached the next level of their career, someone will ask for their help.