People say humor writing is hard. It’s not that hard. Not if you know the formula.

Yes, there are actually steps you can follow to write humor.

(Now, writing humor well is another topic entirely. For that, you’ll need years of practice spent studying humor and language.)

Humor is based on a number of different things that all have to happen at the same time, chief among them is letting people make the connection in their own brains (there’s also Recognition and Surprise, but we’ll discuss those later). If the reader can make that connection on there own, something is funny. If they don’t make it, because they’re unfamiliar with the topic, the joke dies, and you lose the laugh.

This is why you should never explain jokes or repeat them. The connection, and the surprise that comes with it, are gone, and so is the opportunity to laugh. 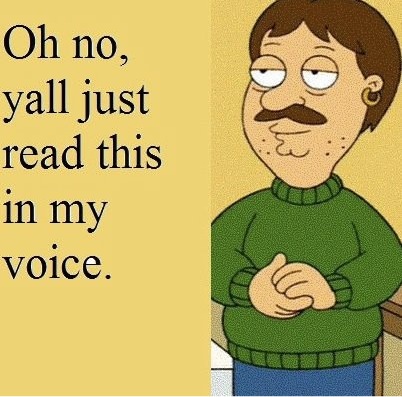 If you watch Family Guy, you’ll get this, and it should have made you at least chuckle. If you don’t, you don’t know who this is, and you’ll never get the joke.

So for you Family Guy viewers, why was it funny? Because a few things all happened at the same time:

If those three things happened — all at once, mind you — the joke scores and you laughed. But if you didn’t recognize Bruce, or you don’t know what he sounds like, or you’ve already seen this before, there’s no laugh.

To make a joke score, whether you’re telling it or writing it, you need to let people make a connection in their own minds.