Ernest Hemingway would have kicked ass as a blogger.

No, really. I’ve been on a major Hemingway kick for the last several weeks, reading his short stories, his books and ideas on writing, and even a collection of stories he wrote when he was a cub reporter with the Kansas City Star, and I’m convinced he would be an A-List blogger in a matter of weeks. 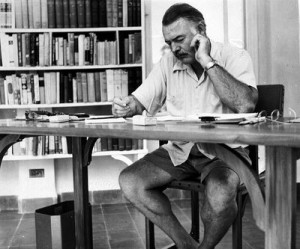 Hemingway’s writing habits are what would have made him an ideal blogger.Here are what I think his five secrets to good blogging would be.

Blogging is the new newspaper. Posts need to be short, punchy, and interesting right from the very beginning — all characteristics that marked a Hemingway story. Follow these Hemingway techniques to make your posts more interesting and dramatic.