I think it’s actually a little of both.

On the one hand, there are people who will never optimize a single blog post for search engines. They just write awesome stuff and people flock to them through word of mouth.

On the other, there are people who believe that it’s okay to churn out crap, just so long as you win search engine results. Their thought is if you win more search, you get more traffic.

I call it blogging for posterity.

Blogging for posterity means you want to win search, but you also want people to read it. It means you optimize for search while you write as well as you can. This shouldn’t be an either/or proposition.

I had a great example of writing for posterity on my Laughing Stalk humor blog last week. For no reason that I can determine, I got a big spike of readers — 600 over 3 days — showing up at a column I wrote nearly a year ago.

My newspaper humor column, “Honey, It’s Over. Burma Shave!“, started ranking high on my Google Analytics, nearly 10 months after I first wrote it. 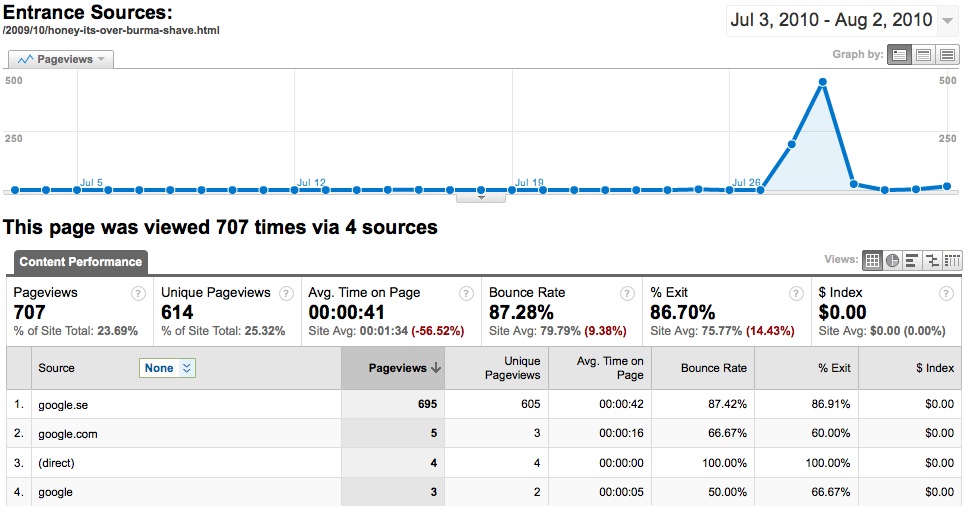 The source? Google.se, or Google Sweden.

What I know is that I had nearly 606 Swedes visit my site over a 3 day period, and spend some time on my site. They came because they found me on Google (Google Sweden, which I guess just makes me Swedish famous), and they stayed for an average of 40 seconds. Not huge time, but all the RSS bots seem to be screwing with my Time On Page stats.

Had I tried to just focus on search for this post, my readability would have most likely suffered. But had I just focused on readership, I may never have been found. But I was writing/blogging for posterity, and I was able to enjoy the benefits without stressing out about it.