In the face of the meningitis outbreak, which was caused by tainted drugs, the Food and Drug Administration (FDA) should be leading the crisis communication.

That responsibility has fallen to the CDC (Centers for Disease Control and Prevention). 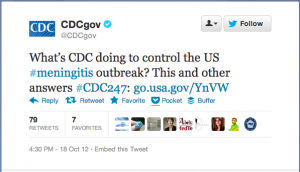 Why? Because we, as the public and consumers of media, trust the CDC. We don’t trust the FDA.

The FDA should be embarrassed.

Jim Garrow pointed out on his Face of the Matter blog — Building Trust is an Everyday Job — that the FDA should be in charge of this outbreak, since it was caused by tainted drugs, which fall under the FDA’s purview. The CDC oversees contagious disease outbreaks, which this is not.

Yet, according to a recent Mashable article, “. . .Twitter users searched for the Center for Disease Control and Prevention (CDC) more often than the Food and Drug Administration (FDA).” Furthermore, the CDC is regularly updating the media through conference calls about what’s being done about the outbreak, not the FDA.

Believe me, there is a distinct division between agencies. They usually don’t cooperate or communicate, even when they’re treading some of the same ground. I can only imagine there has been some jockeying for position, for credibility, and for Top Dog-ness between the two three-letter agencies.

So when the CDC, and not the FDA, started holding media conference calls, we should have gotten a clue about the problem, and gotten a good indication about who the media (and the public) trusts and who they don’t. Who has done a good job of earning our trust, and who hasn’t.

Who uses social media well, and who doesn’t.

The CDC has been getting some great press coverage over the last couple of years, thanks to things like the CDC’s Zombie Preparedness campaign, which actually taught people how to prepare for a viral outbreak like pan flu. (Pretty sneaky, CDC.)

While the FDA has tweeted one time — ONCE! — about the meningitis outbreak, in between tweets about Breast Cancer Awareness Month and the Kefauver-Harris Drug Amendments of the 1960s to its 13,875 followers (seriously? I have almost as many followers as the FDA?!), the @CDCemergency account has tweeted updates 6 times to its 1.375 MILLION followers.

(Pro tip: If you’re in the middle of an outbreak of a deadly disease because of tainted drugs, it’s probably not a good idea to commemorate the historical signing of an amendment to make drugs safer. Or to tweet about that more often than you tweet about the contaminated drugs that are currently killing people.)

Any wonder why we trust the CDC more?

The Fight For Credibility and Eyeballs Begins NOW

The CDC has been doing this by tweeting out important information during small crises, and treating them like practice before a big event. They communicate regularly with people, they use social media to its fullest — complete with Facebook page, Twitter accounts galore, blogs, YouTube videos, and just about anything else (hell, they even have a Google+ page for their National Prevention Information Network!). Meanwhile, the FDA’s website still has a starry night background with a dancing baby animation (okay, not really; but they’re still referring to Twitter as a microblog; it quit being a microblog in 2010.).

The short of it is this: You can’t wait until the day of a crisis to launch your crisis communication plan. That thing had to be in play months in advance. And the FDA has lost all control of this crisis, and abdicated it to the CDC.

Maybe this will be a wake-up call to the FDA that they need to do better, so the next time it happens, they can actually be prepared, and we’ll be more likely to trust them.

And you can read all about their efforts on their new Friendster page.