A personal branding question I’m regularly asked by authors, artists, and other creative types is whether someone should have multiple Twitter accounts. In fact, someone posted that very question to an audio theater Facebook group I belong to:

Looking for opinions regarding Twitter: Is it better to have separate accounts for each show you’re creating, or just one main company account that posts on behalf of all shows? I’ve seen it both ways so I was interested in seeing which way people like more.

Well, to start with, you may have seen it both ways, but those “more than one account” people are probably wrong. I’ve seen people run red lights, but that doesn’t mean the rest of us should do it.

I’ve seen people create Twitter accounts for movies, TV shows, books, plays, and any other creative venture you could name. People get excited about a project, and they want to build some buzz around it, so they create social media accounts around that one project.

That’s not the best way to go about things, because those projects typically have a short life, which means the Twitter accounts do, too. Then, the creators are off onto another creative venture, creating yet another social media account.

So let me just say this: Create a single account for yourself or your creative group as the brand. Focus all your energy into building that account. 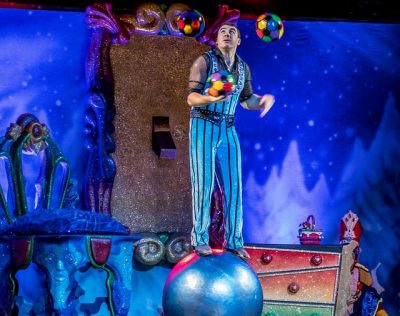 Think of your favorite actor. Don’t you follow them through their variety of performances? Wouldn’t it be a pain in the ass if you had to re-find them for each character they played? Every time a show or movie ends, you have to wait to find out what their next role is, follow them, and soak in all the goodness, until that role ends. And then you repeat the process.

Think of how painful that would be if your favorite musician launched a new Twitter account every time they recorded a new album.

Can you imagine how much of a time waster it would be if your favorite painter created a Twitter account for every new painting they did? Bob Ross would have created 403 Twitter accounts just for his show paintings, although the actual number may be closer to 30,000.

It’s About Your Personal Brand

You’re better off focusing your energy and efforts on building your personal brand, or your troupe’s brand because that’s the thing people are interested in. Just like you have your favorite performer that you follow from project to project, people will follow you along your creative journey as well. They don’t start and stop with each project, they’re with you every step of the way.

Spend your time building an audience for your group, getting people emotionally invested in that account, and coming to rely on it for news and information about what you’re doing. Have conversations with people with that account, so people are more likely to like and trust it.

Imagine putting all that time and energy into a project account, only to have to repeat the effort several months later. And then doing it again a year after that.

You would have to repeat the brand-building exercise over and over, trying to re-convince your audience from the last show to join you on the new account, and then re-re-convincing them on the one after that. And the next one. And the next one.

By having an account that spans for years, you can even give your new fans a look at your old history as they look back to see what else you have done. As your account grows and ages, people can take a retrospective look at your catalog of work, which they can’t do if you only have a Twitter account that lasts for a year or two.