Fiction writers and playwrights use storytelling structures to build their story arcs. As someone who has feet planted in both the fiction writing world and the content marketing world, I try to bring these two worlds together. So for the next few months, I’m going to examine the different storytelling structures and determine how they can be used in a content marketing setting.

Among storytelling structures, Freytag’s Pyramid is one of the most common and easiest to understand. If you took any literature classes in school, you may have even heard of this one.

Based on the work of German playwright Gustav Freytag, Freytag’s Pyramid is applied to a typical 5-act play. (Sort of the Romans’ “new and improved” followup to Aristotle’s original 3-act story.) 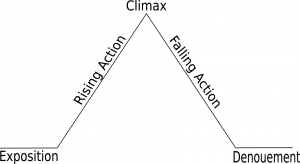 The idea, said Gustav, is the traditional 5-act structure can be broken down like this:

See how it all fits together? Nearly all of Shakespeare’s plays fit within this structure, although it’s important to note that stories will fit into more than one storytelling structure. There’s no right or wrong one.

For example, The Hobbit is often considered a Hero’s Journey story, it can also be mapped out in a five act structure:

(And if you start hollering about spoilers, the book is 80 years old. You should have read it by now.)

It’s important to note that Freytag’s Pyamid is not ideally suited for modern stories, which can have 8 acts or even just a strung-together series of scenes. Can you imagine how terrible Avengers 2 would be if the Avengers defeated Ultron at the 1-hour mark? Then we’ve got 1:22 of the Avengers rebuilding stuff and talking about their feelings and shit. Plus, most modern stories have a few climactic scenes, like any Marvel movie. (That structure is called The Fichtean Curve, and I’ll cover it in a week or so.)

However, Herr Freytag’s construct is a little more forgiving in a content marketing setting, because it doesn’t always have to focus on two characters, like the Hero’s Journey. There, you’re either the Hero or the Mentor.

Freytag’s Pyramid still follows the exploits of a protagonist and an antagonist, but there are a couple of important differences. First of all, victory is not always guaranteed. Second, we can learn from these failures and use them as a cautionary tale. Third, we can learn about any follow-up and fallout from the climactic pivot point.