App.net, the open-source Twitter competitor, could be the thing that defeats and replaces Twitter, at least for those people who are starting to look at Twitter the same way a married couple begins to realize that the honeymoon ended 10 years ago.

We all assumed — at least those of us who have been on Twitter for a few years — that Twitter had the same do-no-evil attitude that Google did. That they were going to be cool.

But over the last 12 months, the sheen has come off and what were once cute little quirks have become full-blown annoyances. 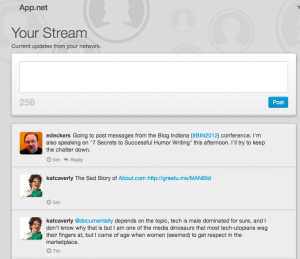 Twitter keeps turning more and more into Facebook every day. And I don’t mean that in a good way.

Entrepreneur Dalton Caldwell, a rock star prodigy among the A-list tech entrepreneurs, told ReadWriteWeb that these are the “classic symptoms of an online media company failing to fly. ‘Media companies are starving,’ Caldwell says, ‘and that’s why they do crazy things.'”

So I was very excited to hear about App.net (app dot net) as a possible new Twitter alternative.

The best part? It costs 50 bucks a year to use.

Yes, Twitter is free. Yes, Twitter has more than 500 million accounts on it, and is the most widely accepted microblog on the planet.

But here’s what App.net has that Twitter does not.

If you’re tired of Twitter and wish there was an alternative, check out App.net. If you like what you see, pledge your $50, send Dalton (@DaltonC) a tweet (yes, I’m aware of the irony of that), and once you’re in, start communicating. I’ll be at the Blog Indiana conference for the next two days, sharing what I learn on Twitter, but also on App.net.

Hope to see you there.