Don’t get me wrong. I think it’s a cool site, and I like the community it’s building, and the sharing that’s going on. I also like the back end SEO that’s happening, and what it’s doing for web traffic.

I’m a words guy. You know, these things you’re reading right now. They give me context. I get meaning from words that I don’t get from pictures. They express ideas and educate me. Pictures can’t do that nearly as well as words. And Pinterest, as a collection of photos, doesn’t always give me the context and meaning that I need in order to understand why you thought that particular photo was important. 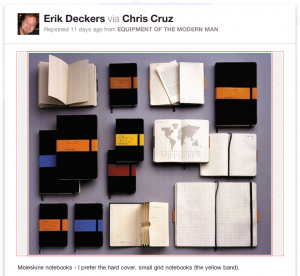 As I’ve said before, a word is worth a thousand pictures. A picture of a baby has a different context and meaning for me than it does for you. Pin a picture of a baby on your board, and there could be any number of reasons why you did it. It’s your child, it’s your niece or nephew, it’s you as a baby. Whatever. Right now, it’s a picture of a baby, and I have no idea why you think it’s interesting.

“But you can read the description and board title to figure out the context,” you’re saying.

That’s right, I can read the description and title — made up of words — to figure out the context. Without your words, that’s just a picture of a baby.

Why did you think this was interesting? Where did you see this? What’s the story behind it? Is that you when you were 14 months old? Is that your nephew about to dump a bowl of cereal on the floor?

You have 500 characters to explain this all to me, but most comments I read are usually “too funny,” “WANT!”, or “that’s a deal breaker, ladies!” so I have no idea what was so interesting about the chicken sleeping in the kayak converted into a hammock.

Basically, if you’re not putting words with your photos, I have no idea what’s so important about what you just pinned, so I don’t click it, follow it, look at it, or pay a lick of attention to it.

It would be nice if Pinterest could include the websites where the photos were pinned from, or let you highlight important text to include with your pin. It would be great if people would put more than one or two words describing the photo. It’s not that hard, is it? Answer the question, “I like this because it _________” and tell everyone why that particular item caught your eye.

(For the record, writing “grapes” under a picture of grapes is not helpful. I can see they’re grapes.)

Like I said, it’s not that I think Pinterest is a bad thing. It’s a cool site, and I use it occasionally to share pictures of stuff I want (making it the most expensive Christmas list manager ever created), interesting ideas I’ve found, or funny photos and captions that made me laugh.

But as someone who thinks in words more than pictures, I need Pinterest and its users to give me a little context about what I’m seeing. Otherwise it’s just a bunch of pictures of food, clothes, and last night’s Oscars fashion.