Of course not! Don’t be stupid!

But you might not know it if you look at a newspaper clipping from an unnamed newspaper (which was originally posted on James Joyner’s Outside the Beltway blog, “Merle Haggard and the Gay Serial Comma“). The clipping features a photo of the country music star with the caption, “The documentary was filmed over three years. Among those interviewed were his two ex-wives, Kris Kristofferson and Robert Duvall.” 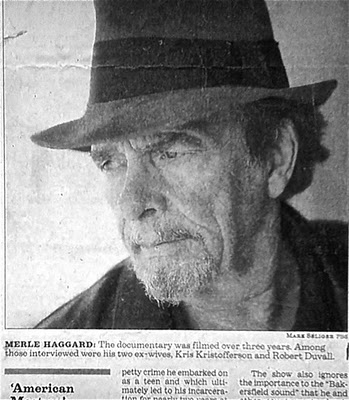 That’s because the newspaper forgot to put the Oxford comma after “Kristofferson.” If they had, it would look like the documentary interviewed four people: two ex-wives, Kristofferson, and Duvall.

But the Associated Press typically does not use this device, and as a result, most newspaper writers and editors have taken it to mean “There will be NO Oxford Commas EVER!” What they forget is that the Oxford comma may be used if it will clarify a confusing sentence. And the sentence about Merle Haggard’s marriage partners is about as confusing as it can get.

Adding the Oxford comma would have told us that Kristofferson and Duvall were not part of the previous group, “his two ex-wives,” but rather, were two additional people. It’s exactly like the book author who dedicated his book “To my parents, the Pope and Mother Teresa.”

I may have the occasional argument with an editor or punctuation stickler about the use of my beloved Oxford comma, but I have never seen an instance where using the Oxford comma caused confusion. On the other hand, there are occasions where blindly adhering to the “no Oxford comma” rule can cause all kinds of confusion. Or at least raise some interesting questions.