We tend to be pretty passive-aggressive as a society. And social media seems to have made it worse, in some ways. Social media has made it possible for us to point out bad behavior, and we’ll often do it to a complete stranger, but we won’t do it to our friends.

I did a short (unscientific) survey last month to find out whether people would call out bad behavior on the part of strangers versus friends. I wasn’t surprised by some of the results, partly because most of the people I know are pretty nice people and not prone to being online jerks. But mostly because many respondents are from the Midwest, and we’re annoyingly nice about a lot of things.

Basically what I found is, we are more likely to forgive friends, but we will stick it to a complete stranger.

This was a four question survey, with a series of answers that asks about responses that range from very direct (and rather jerky) to very passive (being a doormat).

For example, question #1 asked: When a friend — who uses social media — wrongs me in some way, I am more likely to:

So would you @reply someone or set your Facebook status to call them out by name? Or would you passive-aggressively point out to the whole world that some unnamed jerkface missed your morning meeting?

I wasn’t that surprised by the results. Most people are nice enough to keep our gripes private, and to not air our grievances in public, and the numbers bore this out. Out of 107 responses to Question 1:

The results were a little more dramatic this time compared to what people would say to their friends. Out of 106 responses (someone missed this one): 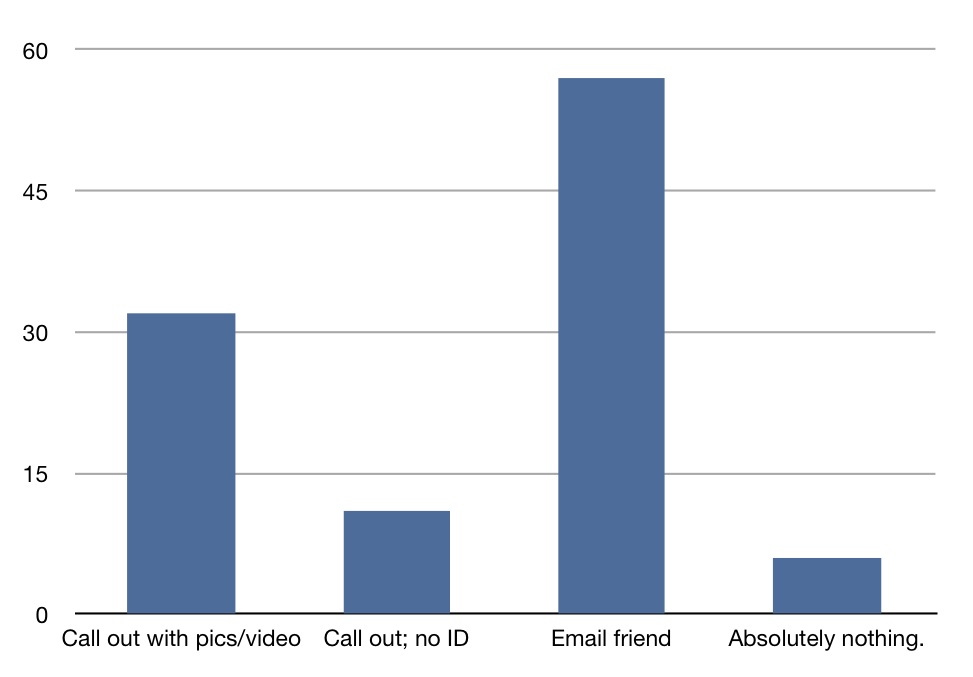 When a stranger does something annoying in public, I am more likely to:

This is the stuff that intrigues me, and really makes me wish I had paid better attention in stats class in grad school. Because there are some interesting correlations between what we consider acceptable behavior toward friends versus complete strangers.

So what does all of this mean? Are we people with a strong sense of moral outrage who will point out the failings of other people, but only when they’re not anyone we know? And do we hold back out of fear of retribution or respect for our friends’ feelings? Or do we have an overwhelming sense of schadenfreude, but refrain from doing it at inappropriate moments?

The rest of the questions:

Question #3: When I am having an argument with a friend or family member, I will start/continue the discussion on a social network.

Question #4: Which social network do you use the most?