My post about three secrets to improve your Klout score generated a lot of discussion, partly about other techniques, but also wondering why Klout is even important.

Billy Kirsch asked how it would influence him on Twitter. Brooke Randolph wanted to know how it would help her, and why she would want to improve her score beyond bragging rights. And Ivan Torres said it was just an artificial number that didn’t affect the experience. 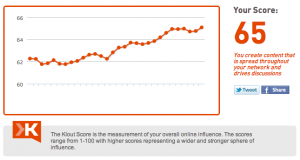 To answer these questions, let’s take a look at what your Klout score means.

Your Klout score is basically the best way we have to quantify whether you’re doing a good job on social media. While it measures mostly Twitter, it also looks at your activity on Facebook and LinkedIn. It’s a measurement of your social media influence — your clout — and whether people like and trust you enough to respond to the things you do. In other words, if your social media footprint were a sales letter, would your readers respond to your call to action?

Klout measures things like this and compiles your score, based on a scale of 1 – 100. However, it’s different from your traditional grading scale: 60 is not a D, and you have to be an international star to get 100. Chris Brogan has one of the highest Twitter scores, and he has a 81. Ashton Kutcher has 81, and Justin Bieber has 100. (I also have a higher score than Helio Castroneves, even though he has more followers and more Indy 500 wins than I do, so being a celebrity is no guarantee you have a high Klout score.)

So what does a good Klout score do for you?

Truthfully, not much. You don’t win prizes, you don’t gain fame or fortune, and you don’t get book deals. Beyond bragging rights, there’s not a lot that Klout will do for you.

Except people with higher Klout scores are considered influencers. People with high Klout scores have worked hard to grow and polish their reputation, and become the kind of person other people want to click through, retweet, and talk to. And these people get some benefits from marketers who want to reach people with good reputations.

So what is the benefit to you to having a decent Klout score? Right now, not much. Free movies, free swag from TV shows, free meals, and a chance to drive a car that costs more than the average national salary. Plus, you get to dog on your friends who may have a score lower than yours.

But, and this is what’s most important, you’re getting a good indication of how your social media efforts are working out. Think of this as analytics for your social media influence. It may be an artificial number, but it’s the closest thing we’ve got to a quantitative indication about how well we’re doing. And while people are still debating the efficacy of the Klout score, it’s the best indicator out there.

So use it, take it with a grain of salt, but don’t ignore it or dismiss it out of hand. If you care about whether you’re actually making progress in your social media efforts — or you just want some cool swag — pay attention to Klout until something better comes along, or until they improve.